Whistleblower lawsuits: How to avoid becoming a target 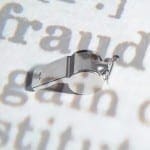 They allege that the nation’s largest supplier of HIV/AIDS medical care participated in patient referral kickbacks to the tune of at least $20 million since 2010.

All three plaintiffs held management positions at AHF before they were terminated and allege they were fired after notifying their bosses about the alleged violations of the False Claims Act.

Although the company’s president vehemently denies the claims and has stated that both the feds and the state have declined to intervene in the legal action, the cat is essentially out of the bag and AHF will now be forced to fight the allegations in court, which no doubt will prove costly.

Each year hundreds of whistleblower lawsuits are filed around the country. In 2014, the U.S. Department of Justice obtained a record $5.7 billion in settlements and judgments from civil cases involving fraud and false claims against the government for the fiscal year ending September 30. Of that, $2.3 billion came from healthcare fraud recoveries and, according to the DOJ, “marked five straight years the department has recovered more than $2 billion in cases involving false claims against federal health care programs such as Medicare, Medicaid and TRICARE, the health care program for the military.

Of the $5.69 billion that the government recovered last year, nearly $3 billion related to lawsuits filed under the qui tam provisions of the False Claims Act.  During the same period, the government paid out $435 million to the individuals who exposed fraud and false claims by filing a qui tam complaint.

Although employees and former employees most commonly file a whistleblower lawsuit, just about anyone with first-hand knowledge of fraud can file one. Others include competitors, subcontractors, public interest groups, state and local governments, among others.

Individuals who file these suits are called “relators” and they stand to receive a portion of the money recovered. Often damages can rise into the millions.

Because of the high-stakes involved, and the fact that the number of these cases continues to increase, healthcare providers would be well-advised to take steps to avoid becoming the target of a whistleblower lawsuit.

First: Have written policies and procedures in place and educate your employees and contractors about the False Claims Act.

Second: Conduct internal monitoring. Make sure that the policies and procedures you have in place are being enforced.

Third: Keep the lines of communication open. If an employee comes to management seeking to report what they perceive to be illegal conduct, take their claims seriously. If a potential whistleblower doesn’t feel like they are being heard, they may move on and report their suspicions to government regulators.

Fourth: Do not engage in retaliation against the employee who is reporting the allegations of misconduct.

Fifth: If you discover there is a problem, consider reporting the violation to the government. Doing so within 30 days of discovery may significantly reduce your damages and penalties. However, it’s a good idea to first consult legal counsel before running to the government.

The Health Law Offices of Anthony C. Vitale is known for its representation of whistleblowers, as well as our ability to defend those who are the target of a whistleblower action. Our proactive approach in defending our clients helps to reduce the risks early on in an effort to find a successful resolution¸ even before litigation begins, saving our clients’ time and money.