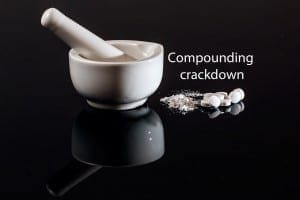 Allegations of fraudulent billing practices involving compounding pharmacies and specialty creams is rearing its ugly head again. Now, the U.S. Department of Justice is investigating what is suspected to be half a billion dollars in healthcare fraud linked to these creams used to treat pain.

TRICARE, the health insurance program for members of the U.S. military, their family and retired military, is believed to have been the largest target of the alleged fraud, although Medicare, Medicaid and private insurers also have been billed.

Retired NFL quarterback Brett Favre has been linked to the latest investigation that was launched last month after federal and state agents raided compounding pharmacies in Mississippi, Alabama, Florida and Utah. The former Green Bay Packers legend served as spokesperson for RxPro, a pain cream made by World Health Industries Inc. Favre and a business partner also formed 3B Medical Group LLC, which, according to an article in the Wall Street Journal, acted as a marketing and sales generation source for RxPro.

This is just the latest in a string of investigations involving the prescribing of compounded creams by specialty pharmacies. Last week, two pharmacies and four doctors in Jacksonville agreed to pay $10 million to resolve allegations relating to fraudulent billing practices. The United States contends that these four physicians wrote hundreds of prescriptions for pain and scar creams. The pharmacies, in turn, billed the TRICARE program tens of thousands of dollars for creams that, in some instances, weren’t even being used by patients.

“Records reviewed by the government showed that the pharmacy was making up to 90 percent profit for each cream submitted to the TRICARE program. This profit was then disbursed to the doctors who wrote the prescriptions. In some cases, the four physicians recruited other doctors to write prescriptions – promising to share revenue with them,” according to a press release issued by the U.S. Attorney for the Middle District of Florida.

Since March 2015, the U.S. Attorney’s Office that covers Florida from Jacksonville to Fort Myers has collected at least $50 million in civil settlements related to compounding pharmacies, according to an article in the Florida Times Union.

As we have previously written about, in some instances, physicians are being enticed to write prescriptions for compounded medications in exchange for a share of the profits. In other instances, doctors are being solicited by marketing companies to enroll their patients in pain cream studies in exchange for remuneration.

The federal Anti-kickback statute prohibits individuals or entities from offering or paying, or from soliciting or receiving, remuneration to induce prescriptions reimbursed by federal healthcare programs (i.e. TRICARE, Medicare, Medicaid).

Many states, including Florida, also have anti-fraud and abuse and anti-referral laws (i.e. the Florida Patient Self Referral Act and the Florida Anti-Kickback Statute) and many medical and pharmacy boards have their own regulations relating to referral practices.

Enforcement agencies allege that telemarketers promote these medications and market them directly to patients, using physicians or nurse practitioners to essentially rubber stamp needed prescriptions in exchange for payment. And, the stakes are high since many of these compounded medications come with huge price tags – some in the tens of thousands of dollars per prescription.

It is imperative for anyone – compounding pharmacy, physician or marketer – who is contacted by an investigator to seek immediate legal counsel.

The Health Law Offices of Anthony C. Vitale has been representing clients under investigation for 25 years. The firm conducts confidential defense investigations and will take you through the process in an effort to reduce or eliminate criminal, civil, licensure and administrative liability.