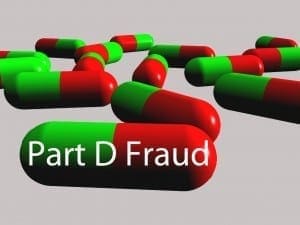 When the Department of Justice earlier this month announced the arrest of 243 people for Medicare fraud, it noted that 50 of the defendants were charged with crimes related to the Medicare prescription drug benefit program known as Part D.

Prescription drug fraud has become the fastest-growing component of the Medicare program overall, and is ripe for fraud, as evidenced not only by those arrests, but also by two new reports from the U.S. Department of Health & Human Services Office of the Inspector General (OIG).

The first report notes that since the program went into effect in 2006, the OIG has had ongoing concerns about abuse and diversion of Part D drugs. “OIG reviews have revealed questionable billing associated with pharmacies, prescribers, and beneficiaries involving both controlled and non-controlled substances,” the report states. Schemes include drug diversion, billing for drugs not dispensed and kickbacks.

OIG issued the aforementioned report in conjunction with a second report titled “Ensuring the Integrity of Medicare Part D, which summarizes the OIG’s efforts and provides an update on the Centers for Medicare and Medicaid’s efforts to put a stop to fraud. Although CMS is responsible for overseeing the program, it is run by private insurance companies.

In the past, as with this latest report, the OIG has been critical of CMS’ efforts. It notes that, “CMS is missing opportunities to leverage data to identify fraud, waste and abuse.” In particular the OIG criticizes CMS for failing to make it mandatory for plan sponsors to report information on fraud.

CMS contracts with a private company to serve as the Medicare Drug Integrity Contractor (MEDIC), to detect and prevent fraud, waste and abuse in Part D. However, OIG said that rather than being proactive in detecting fraud through the use of its own data, MEDIC is relying on “external sources” i.e. whistleblowers, to identify fraud and abuse. OIG’s recommendation: Require plan sponsors to report all potential fraud and abuse to CMS and/or the MEDIC

Earlier this year, as part of its data transparency initiative, CMS released detailed data on nearly 1.4 billion prescriptions dispensed to senior citizens and disabled people in the Medicare program in 2013.

The latest reports, coupled with the recent crackdown on Medicare fraud by the feds, is one more indicator that feds are turning up the heat up on Part D fraud.

The Health Law Offices of Anthony C. Vitale stand ready to assist those who find themselves swept up into the government’s intensified efforts in the healthcare fraud arena. Our firm represents healthcare professionals in state and federal court who are charged with fraudulent billing, kickbacks, Medicare, Part D and Medicaid fraud and false claims, among others. Our team of highly skilled attorneys and consultants are here to help you before you become the focus of an investigation and will aggressively defend you should you become the target of one.